Posted on August 23, 2016 by MayFuneral under Blog Posts, Uncategorized
Leave a comment 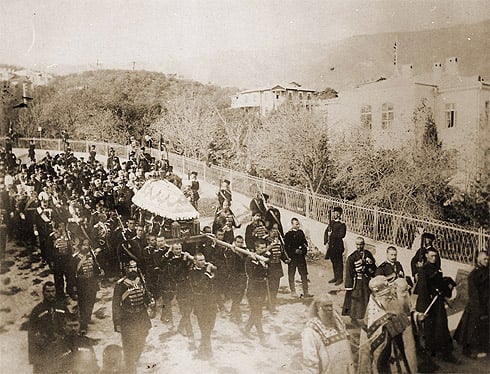 In the 19th century, there were no funeral homes, and most undertakers made furniture or cabinets. they expanded their lines to include caskets and wooden coffins. Then these entrepreneurs offered to “undertake” services for the grieving families, hence the term Undertaker. They would place the body in a casket, dig the grave, and refill it again (or supervise that activity), and perhaps place a marker. In early America, home funerals were the practice everywhere, and each community had a group of women who came in to help with the (laying out of the dead). Visitation was held in the front parlor followed by a procession to the church and cemetery. Most grander homes of the 19th century had a false or “death door” placed off of the formal room, which led to the outside of the house without any steps to remove a deceased family member. It was considered improper to remove a body through the door that the living crossed to enter the house, it was also bad form to carry a dead body outside feet first!

Ever since home parlors have been largely replaced by funeral homes, the formal front room of a home has since became the modern family living room. Caring for your own dead began to change dramatically during the Civil War. Soldiers were dying on the battlefield, and their families would want them sent home for burial. This is when the practice of embalming, for shipping bodies over a long distance, first began to take place. During the same era, the family graveyard was slowly moving towards today’s more park like setting of the local cemetery. Also the U.S. established a number of national military cemeteries, where members of the armed forces were and continue to be buried.

Over time, undertakers became known as morticians and funeral directors to differentiate themselves from their earlier predecessors, the coffin-making tradesman, so as to consider themselves “professionals”. These new professionals also worked out of Funeral homes, or using the first floor of their personal homes as funeral homes with family living quarters upstairs and a morgue/prep or work area. Regular use of embalming was then encouraged, and the new “professionals” used it to suggest they were keepers of the public health. Preserving bodies was relatively new technology in the 1800’s. The bodies were first soaked in arsenic or alcohol, about 3 pounds per body. There are stories of family members who were preserved in a barrel of whiskey until they could be “properly” buried.

Embalming is the act of preserving a body. throughout history, different cultures have practiced this art using various techniques and methods. In the United States the first embalming methods began in the early 19th century at medical schools. A body that wasn’t preserved would deteriorate quickly, making it difficult for a student to study the soft tissues on the human cadaver. They also used a zinc chloride based compound for the preservation of dead flesh, many of these earlier embalming compounds contained deadly poisons such as arsenic.

During the American Civil War, the most famous doctor of his time, Dr. Thomas Holmes. Considered to be the father of modern embalming, by wars end he boasted embalming over 4000 men, he also discovered and promoted safer embalming fluids. After the civil war, embalming became widely recognized by the growing funeral industry. It gave this fledgling industry a sense of professionalism. At the funeral directors national association of the united states annual meeting in 1882 it was decided to replace the name undertaker with funeral director because of its more pleasing and professional connotations. By the late 19th century, despite being the industry’s only competition towards the rising trend of the ancient practice of cremation and it massively ferocious advertising campaign, there was a large-scale acceptance of embalming as a way to sanitize and disinfect the body. It also enabled the family to have extended wakes and gave the funeral director additional skills in cosmetics and reconstructive practices which enabled the deceased to look natural and in a state of slumber. The funeral industry has changed society’s views and attitudes towards death. in the large scale use of funeral homes or funeral parlors changed the connotation of the word “parlor” as a room in the house. No longer will the parlor in a person’s home be associated with a wake, death, loss or mourning, but it could now be a room for the “living” or “living room”

HT May & Son funeral home has helped families and loved ones through the grieving process for more than a century. We have locations in Columbia, Boonville, Sedalia and serve the Fayette Missouri area. To find out about how to plan ahead, contact us today.