Posted on November 1, 2018 by MayFuneral under Blog Posts
Leave a comment 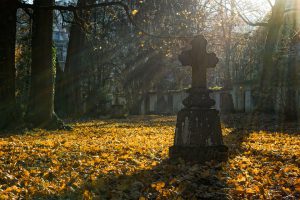 Cremation has been gaining popularity over traditional burial at an exponential rate over the last several decades. With space at cemeteries dwindling, many people endeavor, or are even legally bound to find new ways to inter their loved ones. In stark contrast to traditional Confucianists belief common to South Korea, which instructs family members to respect the deceased’s remains and regularly visit the grave sites, burial rates have sharply declined over the decades with less than 15% being buried in the traditional fashion. In 2000, Korean law mandated that the remains of loved ones be disinterred after 60 years in order to make room for new ‘occupants’. Simply put, Korea is running out of space for traditional burials. Even so, there are still options for family members to give their deceased a final resting place. Many people still find the practice of keeping ashes in an urn unsavory, so a new trend has steadily gained in popularity. For around $900 on average, you can have the ashes of your loved one transformed into up to 5 cups of gem-like stones, or death beads, of varying colors to proudly display or carry with you in your day-to-day interactions.

Many of these companies have sprouted up over the years, one of the most frequented being Bonhyang which opened up shop just south of Seoul. Founder and CEO Bae Jae-yul spent several years refining and developing the process to create Buddhist style death beads in beautiful colors such as pink, purple and black, but the most common color is a soft blue-green. His clients then take these beads home and place them lovingly in glass jars, trays or dishes and even decorate the trays with silks or flowers. Some will divide up the beads amongst the family so they can keep their loved ones close wherever they may be.

There are many different bead shops springing up, and Bae says there are several ways to make these beads. He prefers not to add any extra elements or minerals, strictly using only cremated remains. However, his main competition, Mikwang, says adding certain elements helps to create a more gem-like appearance in a faster, more efficient way.

As the trend continues to gain popularity in South Korea, the concept of death beads has failed to gain much traction in any other countries. Some businesses have opened in Japan, some European countries and the US, but have largely been unsuccessful due to criticisms about the practice. It is the general belief that it is an unnatural way to dispose of bodies and many prefer their loved ones to ‘return to nature’ with a traditional funeral.

These cultural beliefs and differences do not deter Bae who currently has deals with seven Buddhist temples and one Catholic church, and is in the process of negotiating even more deals with religious organizations in Japan, Thailand, the Philippines and China.

Business and profits aside, Bae is proud of his endeavor saying “People are moved and I feel it’s something worthwhile. I’m confident this business will flourish considerably someday.”