The majestic hanging coffins of the Philippines

Posted on October 1, 2016 by MayFuneral under Blog Posts
Leave a comment

The Majestic Hanging Coffins of the Philippines 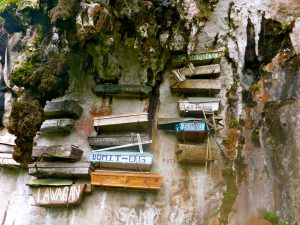 The Igorots are an indigenous tribe living in Sagada, Luzon Island, Philippines. The Igorots practice unique funeral preparation customs unlike today’s traditional ways, or even ancient ways for that matter, in which the dead are buried in coffins that are then tied or nailed to the side of cliffs. It is claimed that this practice is over 2000 years old, although nobody seems to know whether there are any coffins that are actually that old.

The coffins are said to be carved by the elderly before they die. If an elderly person is too weak or ill to do so before passing, his/her son, or a relative would do it for him/her. When the person dies, he/she is placed in the coffin in a fetal position. This is due to the belief that a person should exit the world in the same position that he/she entered it. After being wrapped up in blankets and tied with rattan leaves, the corpse is carried to a cliff in a funeral procession. During this procession, mourners attempt to grab and carry the corpse. This is due to the belief that it is good luck to be smeared with the blood of the deceased, since it would allow a person to possess the skills of the deceased. After reaching the site for the burial, the corpse would be placed in the coffin and tied or nailed to the side of the cliff.

It is commonly thought that by placing the coffin on the side of a cliff, the deceased would be brought closer to heaven/their ancestral spirits. However, it has also been suggested that there were more practical reasons for this. For instance, it has been suggested that the Igorots knew that corpses would decompose quickly when buried in the ground. Hence they decided to bury them on the side of cliffs. In addition, it is said that animals would eat the corpses if they were buried in the ground. Moreover, during the days when headhunting was a common practice, corpses buried in the ground would have been easy targets, while corpses suspended from cliffs would be safe from the head hunters.
Although this is a fascinating burial custom, there are many questions about them that are still unanswered. For instance, although it is claimed that this practice is over 2000 years old, there is no real evidence to prove that it is so. It is possible that this practice originated in China, as there are tribes in southern China, such as the Bo and Guyue, who bury their dead on the side of cliffs as well. In addition, some of these coffins can be dated back to the Zhou Dynasty (1027-777 BC). Therefore, it is plausible that contact between the two peoples allowed the diffusion of such a burial custom.

A more intriguing question perhaps is why they practiced this burial custom? According to Chinese historical sources, the Bo people believed that coffins that are set in high places were auspicious. Moreover, the hardships of earthly life prompted the Bo people to seek an afterlife that was peaceful and quiet, and this was achieved by having their coffins placed on the side of cliffs. In the pre-modern era, burial customs were usually associated with religious or ritual beliefs. Therefore, from my point of view, the Igorots probably had an ideological reason for practicing this custom, alongside the practical reasons that have been mentioned. Due to the lack of written evidence, these reasons are not available to us, and may only be speculated. However, as the Igorots still practice this burial custom, there are still people who have knowledge of it, and this can be recorded, or at least passed down orally. Yet, the dwindling number of people practicing this custom means that it is under the threat of extinction.

HT May & Son funeral home has helped families and loved ones through the grieving process for more than a century. We have locations in Columbia, Boonville, Sedalia and serve the Fayette Missouri area. To find out about how to plan ahead, contact us today.